Fight, Soothe or find your ROAR? 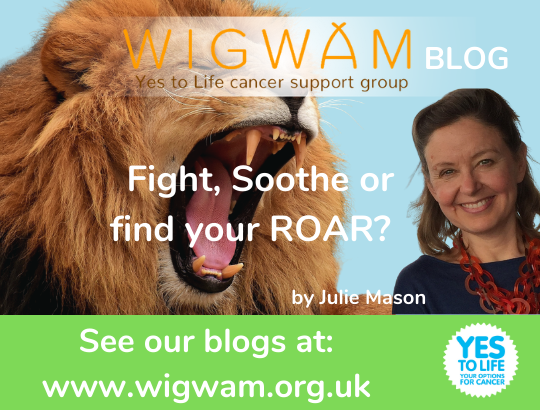 Everybody has their own way of dealing with their cancer journey, but the thought of fighting it never made sense to me. I thought that this week’s Blog could be the sharing of these ideas:

In my childhood I was surrounded by my parents arguing and fighting. My mother would take solace in alcohol and my father would eventually come home and become violent when faced with her drunken aggravation. Later in life I would pride myself on being a person who is not afraid of confrontation and certainly one who tends to fight as opposed to flee in difficult situations. Cancer has taught me that knowing when it is appropriate to fight or flee can be paramount to our survival. But perhaps more importantly it has taught me to become still and centred in my feelings, being kind and loving to myself – soothing that young (inner) child back to equilibrium and vibrant health.

You will probably all know by now that I am talking about the parasympathetic nervous system.

It saddens me greatly when I see people who have been given a new cancer diagnosis left with no tools apart from allopathic treatment as a way forward. The shock of cancer is currently left for the clinic nurses to handle – if they have the time that is. Terminal patients are offered a MacMillan nurse familiar with the process and transition into hospice and pain management. Letting go can feel the right thing for some to do when submitting to their worst fears. These patients often end up dying quickly or hold on to the estimated term given to them. Having been told that I was terminal I completely understand and respect this decision.

Then you also get those who choose to deny the terminal prognosis – those who fight with sheer determination to the bitter end. These people raise the hearts of those around them who rally them on in deep admiration. These are often the patients raising incredible monies for charities doing, marathons and other impressive adventures with a beautiful broad smile on their face and a newly found compassion for the human race. They get the reward of an expiry date which is often later than predicted but we all probably know someone who was like this and death eventually came to greet them nonetheless.

Meanwhile I put to you: is it possible that both of these sets of people choose to exist in the sympathetic nervous system (fight or flight)? In this state their system will be constantly stressed out – fuelled by cortisol and adrenalin – chemicals designed to suspend the immune system temporarily, a survival mechanism meant for short term use not a constant day by day mode of being.

Back to me: I chose to ‘soothe’ myself back to a calm place, from where I could focus my attention on healing as opposed to dying. The easiest thing to run away from would have been myself: the deep wounds that needed compassion and forgiveness towards myself and others. Those deep-seated feelings with an operation system running a program of sadness, anger and resentment.

Once I had dealt with the negative feelings, I found that there was energy to live day by day with feelings such as gratitude, acceptance and love. In this state I was aware that chemicals such as Oxytocin and Serotonin were flooding my system, allowing my body to rest and repair in the best way possible.

I recently heard someone say that their way of dealing with cancer was to find their own inner ‘roar’. I love this. In other words, they would learn to say ‘no’ more often, they would become more assertive and question authority, they would certainly be no push over anymore. In other words, they took charge of their healing and in doing so retained their energy and focus. Calm rather than busyness would become a way of being – they no longer run away from things.

Whatever we choose, perhaps the most important thing (in order to remain daily in a parasympathetic state), is that we start to believe that healing really is possible. After all, using the words of a hands-on healer that I know: “it is only when we can get out of the way, that healing happens”.