Where are the Men? 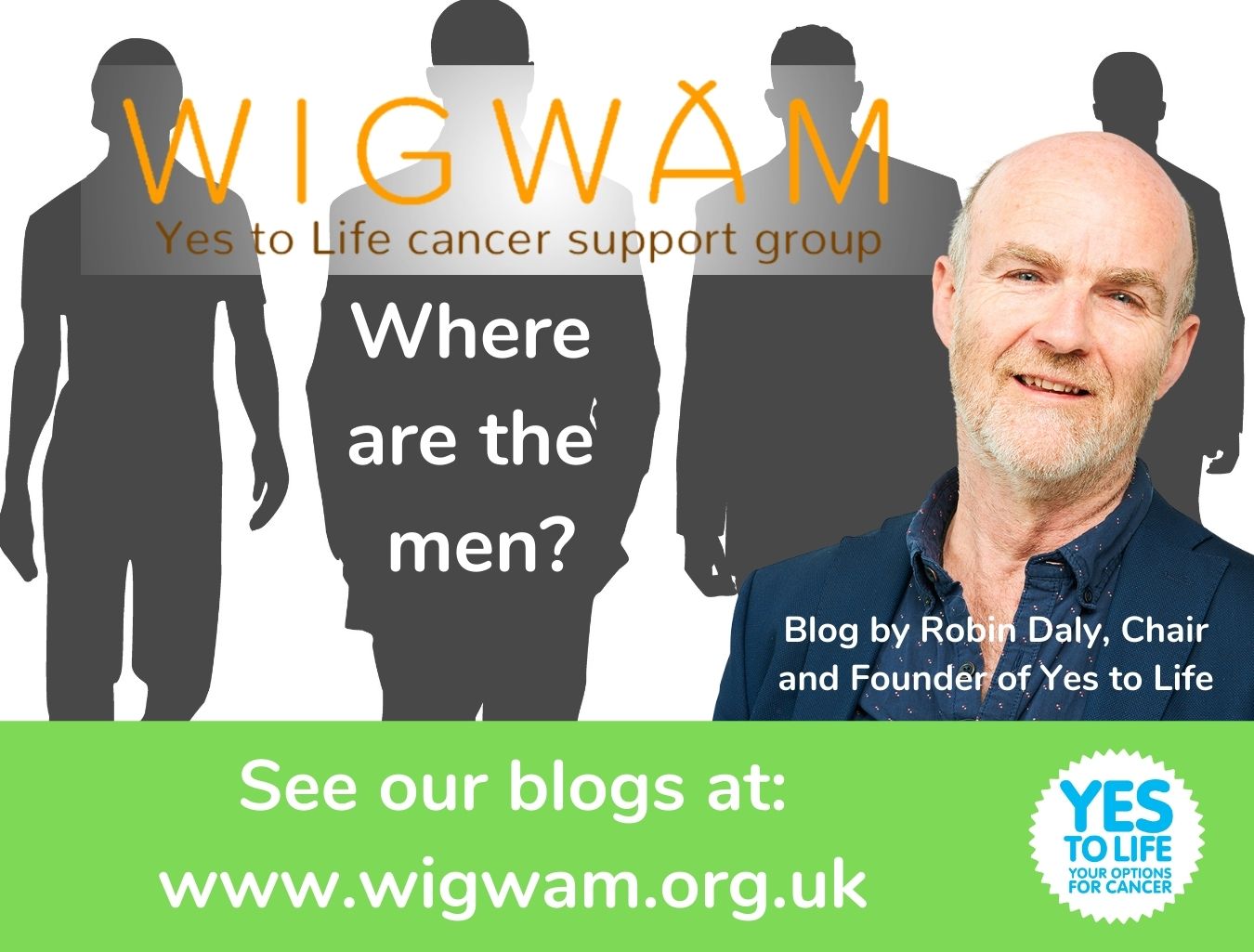 Robin Daly, Chair and Founder of Yes to Life originally wrote this blog in 2018 but has now updated it as this issue is alive today.

If there’s one thing that’s clear from 16 years of developing Yes to Life, it’s that – in the main – men don’t do Complementary Medicine. At least not the ‘softer’ end of Complementary Medicine. They may do ‘outside the box’ treatments such as hyperthermia or intravenous vitamin C, and turn up for a conference on the metabolic theory of cancer, but put on an event investigating the mind-body relationship, and you’ll be lucky if one man turns up.

Kelly Turner, in her landmark book Radical Remission, identified the key factors in the recovery of a large number of people who were expected to die from cancer, as seen from their own perspective. Nine factors or strategies were shared by all those questioned, and of those, seven were in the realm of the mind, spirit and feelings. The message from this seems to be ‘ignore this area at your peril’.

It’s the same state of affairs when it comes to practitioners. I’ve been part of an audience of well over 100 professionals at a lecture on Complementary Medicine and cancer at which the only other male was the speaker. Even within Yes to Life, we have never had a man on the Helpline.

I want to put it out there that I think this is a tragic situation, tragic in two ways:

A man with cancer is every bit in need of support as a woman. Women seem to know they are going to need help and they readily go out in search of it. And these days, the advent of Complementary Medicine means there really is something for everyone out there, from healing to talking therapies to acupuncture. Support groups, retreats, workshops are all largely populated by women. It would seem that some ridiculously outdated abusive male stereotypes around ‘strength’ and ‘independence’ are still prevalent and doing the same damage they have always done to men (and thereby to women). Anger still seems to be the only safe ‘negative’ emotion to wear on the surface, and there is no place for sharing anxiety, despair, confusion and a host of other undesirable and ‘unmasculine’ inner experiences. Genuine strength and independence are about the willingness to be vulnerable. But to do so when men all around are ruled by the law of the jungle is to risk hurt, and so continuing to hide out in a macho shell, just as we have been taught to from day one, often seems a far safer prospect.

None of this is anyone’s fault. It is simply a response to abuse that has been been passed down through the generations, and whereas in the 21st century women are seeking to redefine themselves, I think the same is a lot less true of men. As a result, I would say that men with cancer are largely selling themselves short when it comes to capitalising on all that Integrative Medicine – which includes both conventional and complementary methods – has to offer.

You only need look to fields such as nursing or nursery teaching, to find parallels to the situation in Complementary Medicine. They are largely populated by women. And whereas this is by no means meant to be any sort of complaint about women in these traditionally ‘caring’ roles, it’s just that on the rare occasion a man steps in, I find they bring a different energy and they can be wonderful carers. Until more men have the courage to embrace the unfamiliar ‘feeling’ world of Complementary Medicine, all patients, both men and women will be deprived of male care, Complementary Medicine will continue to be sidelined in favour of technical medicine, and we will all be the poorer for it.

Furthermore, too many men will be deprived of the rich rewards of genuine connection and care in their work. ‘Being a man’ still seems to commonly involve a moth-like attraction to the devouring flames of hostile and abusive environments such as traditional corporations or indeed healthcare. Once there, they are supposed to ‘prove’ themselves, or failing that, to at least try to survive. In this they are part of an endless cycle, because of course abuse begets abuse, and in time they come to take out their victimised rage on the next generation. Although not explicit, it seems to me that the #MeToo campaign is calling for men to step off this treadmill once and for all.

It’s obvious to me that we need both the technical brilliance of conventional medicine and the care and compassion of Complementary Medicine. Hence the stance of Yes to life in supporting Integrative Medicine, the broadest possible, most inclusive approach.

Dr Robin Youngson, inspirational global campaigner for compassion in healthcare, in what he describes as ‘The most important paper I have ever written’(i), describes conventional medicine as ‘mindless’ medicine, in that it applies acute medicine methods to all healthcare. Acute medicine can be reasonably effective with little understanding of, or interest in the person being treated. Although the patient may feel abused in many ways by the experience, they will probably be grateful to be alive. This same approach when applied to complex long-term conditions, creates the health crisis we are now in the midst of. Poor understanding of patient needs combined with a proscriptive and impersonal approach that largely treats symptoms is a recipe for disaster.

And in case you are in any doubts about how bad things are, back in 2014, the NHS reported (ii) that pretty much half of Britain’s adult population had taken a prescribed drug within the last week (so that excludes over-the-counter medications) and almost a quarter had had at least three prescribed drugs. And it gets worse with age – more than half in the 65-75 band were on three or more medications and almost three-quarters in the over 75s. We are a nation on drugs.

I would maintain that it’s fair to characterise conventional medicine as broadly masculine and Complementary Medicine as largely feminine, when looked at from the perspective of relationship to feelings and therefore to genuine person-centred care. Conventional healthcare came up with clinical detachment as a super-strength, bullet-proof version of the male shell. If you want a genuine listening ear, someone determined to get the root of your difficulties and to care about the quality of your life, the place to go is to a Complementary Medicine practitioner.

The lack of care in healthcare systems is legendary, and it is this that Robin Youngson has been valiantly attempting to combat for years. Efforts over many decades to bring in ‘patient-centred care’ and ‘patient choice’ have largely failed to make any impression on the top-down, abusive, military-style constructs of healthcare. Rather the like the men, things desperately need to move on in the way healthcare sees itself. It needs to step outside the fear-driven 20th century paradigm it is stuck in, which continues to foster abuse, not only of those in its ‘care’, but also, crucially, of healthcare workers.

A key element of Dr Youngson’s message is the need to embrace Complementary Medicine if we are to begin to combat the tidal wave of chronic illness that is engulfing us. While not explicitly using the term Integrative Medicine, his mission to bring care and compassion into healthcare seems to be refocussing around the understanding that it already exists within Complementary Medicine, and that therein lie the answers. We need both the ‘masculine’ energy of conventional, and the feminine of complementary medicine to give a full and rounded response to the desperate state of our health, and if we want to create a healthcare system that truly cares for both its patients and its workers.

More and more women are stepping into senior roles within healthcare, but for the desperately-needed change to take hold, we need more men to take up caring roles and to champion the needs of vulnerable people for sensitivity, respect, engagement, listening and a host of other ‘soft’ skills.

So, men, how about joining us as a volunteer at Yes to Life?

See more on our helpline at: https://www.wigwam.org.uk/post/more-about-our-helpline